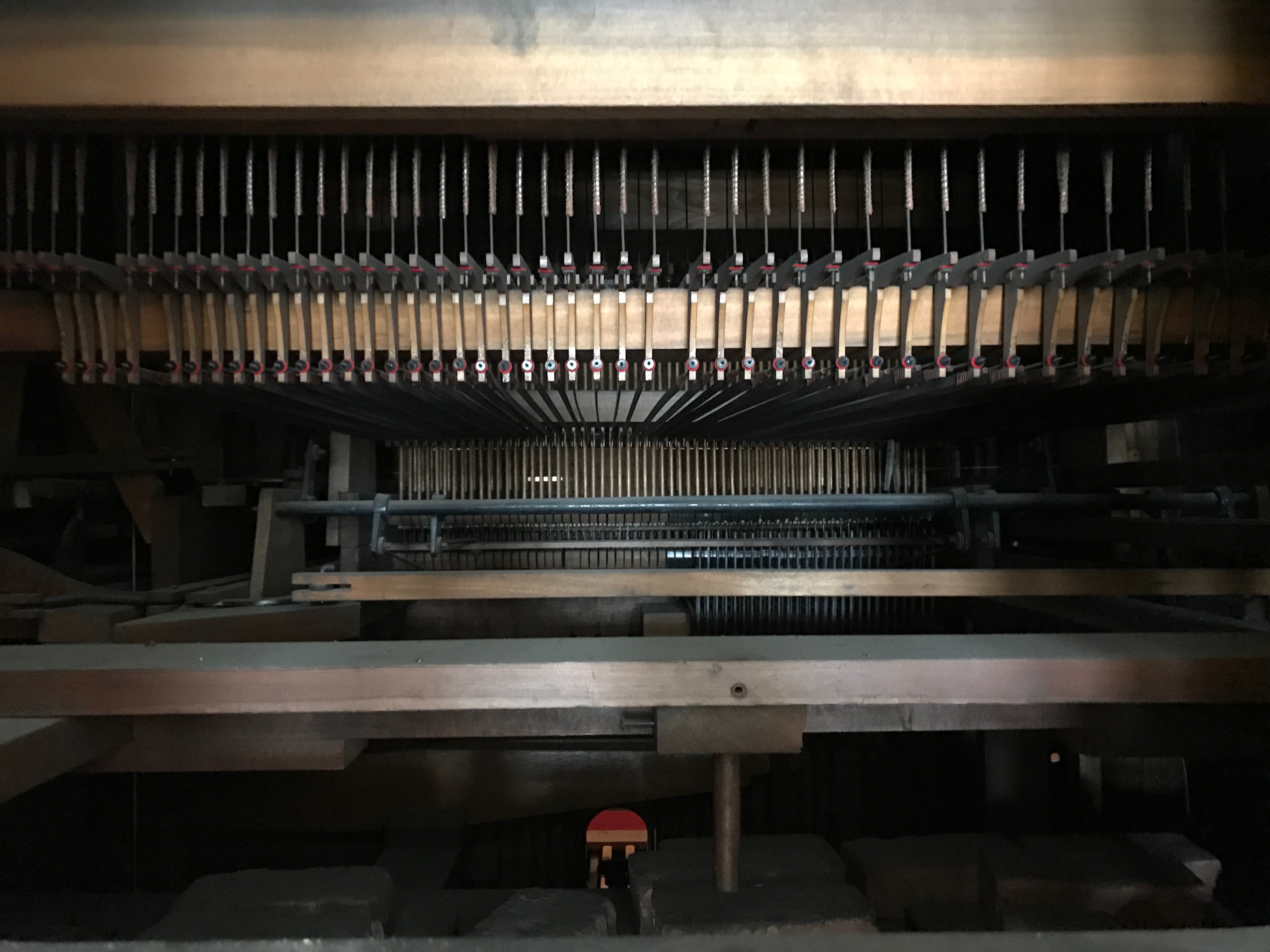 hen we purchased the building that would become Clementine Hall, one of the first things on our demolition list was the removal of the pipe organ. It took up a lot of room and we feared it would make the space look too "churchy" for many clients. As preservationists, however, we knew it would not be as simple as throwing it away.

Organ, Free to a Good Home

With Brenda increasingly asking how I was going to dispose of the organ, and me quickly running out of excuses, I had a timely epiphany. I called the reporter who covers religion at the Tennessean, Nashville's newspaper, and asked her if she would be so kind to post a notice in the paper that we needed the organ removed straight away. Free to a good home.

The next day, the phone started ringing. The next week they put the article in USA Today, the purple colored Weekend section, and the phone rang non-stop. It didn't stop ringing for three months. The organ story went viral, worldwide. What we couldn't know was that the story would resonate with so many people. It had the religion and music angle of course, but it also drew the historic and collector crowd and I suppose the "free stuff" crowd. It pretty much touched everyone.

To this day I get the occasional call from Australia or some far flung place asking if my organ is still available. I enjoyed taking the calls for awhile and learning about the church or collector on the other end of the line. But I started to feel like a judge trying to determine whose organ need was more worthy. I found myself even imposing arbitrary requirements - the organ must be used by the taker, it must go to a church, it must be played standing on one leg, whatever. After awhile Brenda got tired of the never ending organ calls, so I started telling callers that it was gone to make the conversations end. I already had a long list of suitors who met my many criteria.

All of this interest piqued our own interest. Maybe we should learn a bit more about this popular instrument. A small, vintage plaque on the organ proclaimed "Rebuilt by Dennis P. Milnar, Nashville, TN". A quick internet search later, and we picked up the phone.

As it happened, Dennis Milnar was alive and very well. He had maintained the organ since 1965 (almost 60 years!) after he had indeed rebuilt the organ following a fire in the church. The fire nearly destroyed the building. News articles from the period credited a trucker on I-40 with calling in the early morning blaze.

Dennis, owner of Milnar Organ Co., told us that the organ was a George Kilgen & Son fully mechanical model built in St. Louis in 1905. It was shipped to Nashville by railcar. Originally, getting air into the bellows required a person pumping air manually. There's a stop, a wooden knob labeled "Bellows Signal" which when pulled signaled to that person to give it some more air. He also told us that pulling all of the knobs out at once created the organ's maximum volume and that's where the expression "pulling out all the stops" came from.

Dennis did get us excited when he said that the replacement cost for our organ was well over one hundred thousand dollars. (But if you want to sell it, good luck.)

Dennis thought that we should keep the organ, but he wasn't pushy about it. He's a great fellow.

Keep it They Said

Dennis wasn't alone. It turned out that another music notable thought the organ relocation was a sad day. Richard Webster, the Director of Music at Trinity Church in Boston, heard of the organ's demise and flew to Nashville to play it one last time. Richard had grown up in the congregation and had developed his love of the organ while sitting in our pews as a boy. Before he played, he put on some ballet-type shoes, which turned out to be what organists wear when they play. Then he proceeded to play with his feet as well as his hands. At that point, I developed some real respect for organists. Incidentally, this expertise is also why only organists may play it today.

I also began to hear from local musicians who tried to convince us that the organ should stay. One day I answered my cell phone and then nearly dropped it when I heard a voice say "This is T. Bone Burnett". T. Bone wanted to play our organ. Though he's not a true organist (he doesn't play with his feet), he loved it and thought we should keep it. He thought it would benefit our business, not hinder it as we had assumed. Coming from the music genius behind the Oh Brother Where Art Thou? soundtrack, that was a weighty matter to consider.

Then came John Hermann, known by Widespread Panic fans as JoJo. John's daughter and my daughter have been in the same class for a long time and John's a thoughtful guy. He wasn't shy about telling us the organ would benefit our business. I recall his excitement about launching a gospel brunch. John, like T. Bone, lit up when he played it.

At some point, we relented under the pressure. We tested the notion of keeping the organ with some early clients and they were ecstatic about it remaining. So we forged ahead.

The Restoration and Early Reaction

What these advocates didn't tell us was what was involved in restoring an antique pipe organ. In addition to the unanticipated expense, it required a specialized education.

By the time we opened in May 2018, we had replaced the old industrial air generator in the basement (that made a chuga-chuga noise that you could hear all the way in the sanctuary) with a silent blower that was so small it could be housed within the organ framework. Milnar repaired and repainted the organ's pipes which originally were a filagree design in sea foam green. Gold became the style mid-century, Dennis told us. We also fully cleaned and tuned the organ, which was a big deal after the dirty construction process.

With the organ restored, we were interested to see how clients would actually use it. Almost every event appreciates how it looks, so that was a relief. Right off many wedding ceremonies played the organ for their ceremony music, but we also saw the organ played to non-church music, mainly for the dinner hour. The pipe organ gets classified as an instrument for hymns, but it can be used to play any song. Pipe organs seem to get the same rap as banjos and accordions. I suppose before this post ends, it needs to be said that it sounds amazing and the sound completely fills the space.

Last week Jennie Lou Smith walked through our doors and introduced herself as the West Nashville Methodist Church's organist from the early 80s to the mid 90s. We love it when history walks through our doors. Jennie is now the organist at Scarrit Bennett.

We just met a new organist to town, JD Plant. He just redefined what we thought was possible on the organ. You can see his videos here.