Before & After - Clementine's Little Bird Lounge 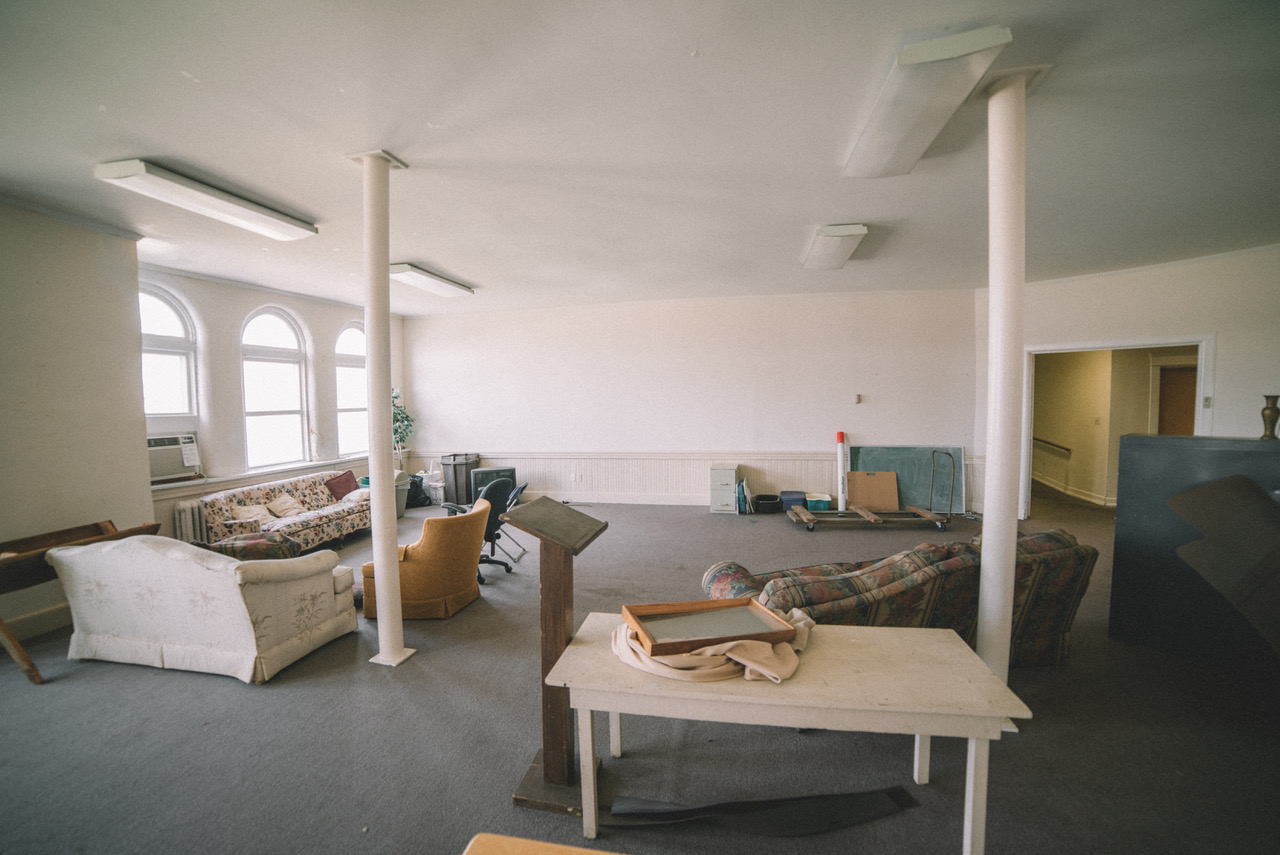 second large interior space has a dramatic impact on may events. It enables a transition from a ceremony to a reception space, among other benefits. Knowing this we paid special attention to what would become Little Bird Lounge. And if you're curious about the origin of the name, it was named after the one and only Ellery, our daughter who we call Little Bird.

Little Bird Lounge is comprised of what was five rooms of the church, all of which were added to the original 1889 structure in 1915. These room were the minister's office, an administrative office, lounge, stage entry and closet and hallway. The original structure was largely hidden.

The challenges posed by Little Bird Lounge may have been the largest of the entire project. Combining five rooms into an open floor plan posed structural issues. Access to the outdoors, Adelaide Hall and even Hathorne (the old Memorial Hall of the church) had to be reconfigured. And then there were the surprises such as the back brick wall threatening to topple into the alley.

After removing the interior walls, carpet, and ceiling tiles, we uncovered the original brick. We were particularly excited to find the wounded brick that framed the windows. The back wall was strapped to the ceiling trussed for stability. The concrete slurry on the wall was chipped away by hand and the residual concrete blasted with baking powder so as not to damage the brick. Large holes in the brick wall were filled with original brick. Original windows that had been filled with rubble and concrete were excavated and restored. In order to address brick variation, we added a wainscoting of black paint over the brick.

We enlarged an entryway into Adelaide Hall and created an identical entry on the opposite side of the pipe organ for symmetry. We discovered that the existing doorway into the lounge had previously been a window before the addition and we restored the doorway to its original window design.

In order to diffuse the natural light from the north, we replace the sashed windows with solid panes of frosted glass covered by gold screens with our Venetian Cross pattern. The windows on the east and west received the same screen treatment but were backlit with LED lighting that may be any color.

The low, suspended office tile ceiling, once removed, revealed a sloping, wedge shape. To achieve maximum ceiling height, we insulated the roof above and exposed the existing trussing, which we painted black in part to conceal the mechanical systems.

Functionally, we added a 20-foot long black marble bar, five bistro tables wrapping the new structural columns and replaced the service door to the pipe organ with a large black steel and glass window. All stone seating and counters match throughout Clementine match the bar counter material. The hallway to Hathorne was sealed and the entry from the outdoors doubled in size and filled with black steel and opaque glass doors. Doors into Adelaide Hall are 10-feet tall and made of walnut with inlaid brass.

The thin plank pine flooring was overplayed with wide panel hickory and stained to match the original wood color.

Two original stained glass widows were unearthed and striped of their paint. They are now backlit and provide a dash of color.

Little Bird Lounge was finished with gold pained birds on the wall.

Today, Little Bird Lounge is an approximately 2,500 sf room that feels much more intimate due to the colors, materials, sloping and textured ceiling and non-boxy footprint. The lounge serves many purposes but food and beverage always factor in prominently.

How We Balance Vendor Choice and Quality

Before & After - Clementine's Brash Courtyard