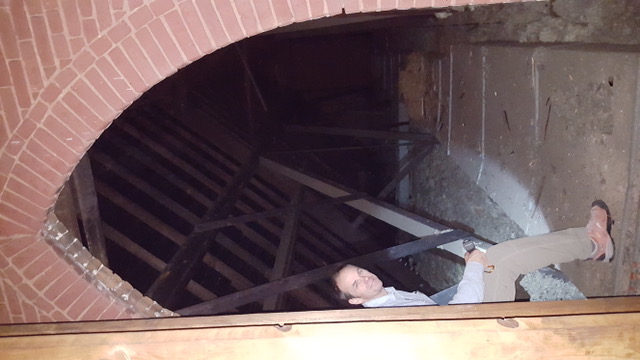 visitors to Clementine are often surprised that we were able to purchase the building. This is in no small part because they assume that the front was always as charming as it is today. We'll debunk that myth in this article.

The facade, as we found it, was a blessing and a curse. It was a blessing in that that 1957 false facade covering the original was so unattractive that potential buyers saw the property as a tear-down, a lot value parcel. The curse was that it was difficult to imagine what even dramatic plastic surgery could accomplish.

In 1957, the bell tower was weakened by storms and was torn down. The church removed the original entry at the same time and added an expanded vestibule, a false facade of a more mid-century design, and a chapel where the bell tower once stood. Though perhaps suiting the tastes of the day, the facade apparently prevented most potential buyers from visiting the property. We think we may have been the only buyer who visited with an eye toward restoring the building.

When we visited, we found an access hatch in the ceiling of the vestibule that led to a mechanical room behind the false facade. Massive air handling units and ducting filled most of the space. What was once the beautiful main gothic window served only as opening for the HVAC ducting.

A small ladder hugged the original facade and led to the gothic window, which had been partially filled in. This window was not even visible from the inside of the church as the drop ceiling and cement on the walls completely concealed it. Looking into the dark attic of the church did reveal the large roof beams and cross bracing. The original brickwork and small stained glass windows were in fair overall condition.

The plan was simple: remove the false facade and mechanical systems, restore the original dragon's tooth brickwork and stained glass windows, and of course add a window to the gothic opening. And all went relatively according to plan. The biggest issue was how we would deal with the different type and color of brick that was behind the original entryway and the different grout color used when repointing the exposed part of the facade sometime after 1957. You'll still see where that entry was and the different grout colors that mark the edge of the false facade if you look closely.

Today, the facade is restored almost to the original design. As with Ruby, we left a few of the battle scars so that where she's been is not lost.