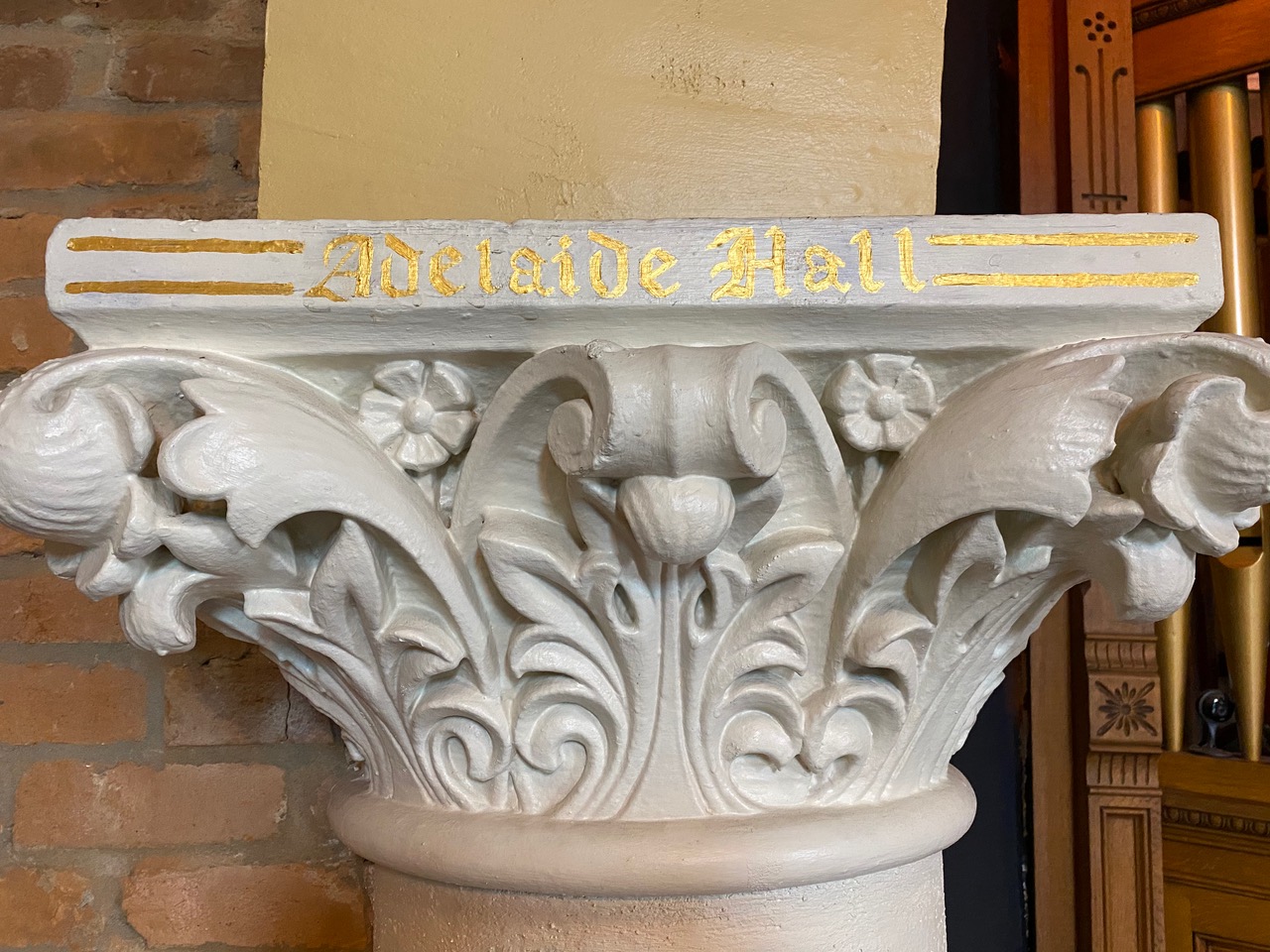 delaide Hall is Clementine's signature space and as such was the focus of the redesign. As the sanctuary, it was the heart of the church, and today it is where most wedding ceremonies, receptions, concerts, dinners, presentations, film and most everything else occur.

The sanctuary was the original structure, built in 1889. Forty five pews remained fixed to the heart pine floors for nearly 130 years. Red carpet lined the aisles. A hip ceiling hid the beams. Concrete coved the brick walls. Steel windows replaced the original wood framed windows sometime in the early 1900s. In 1905, the organ was added and a transept expanded the size of the building (left stage area).

We began by removing all of the original 1889 pews. Today you can find them all over town, including at the tattoo shop down the block (we did keep four). The red carpet was removed, revealing the original heart pine floors. And we put out a "free to a good home" call for the organ, but that is another story you can read about here.

As with Little Bird Lounge, uncovering the brick wall as the first demolition objective. The brick walls were covered from the very beginning by a concrete slurry that was painted white and a wood wainscoting. Revealing the brick was arduous and quite messy. First, the concrete was chipped away by hand. Then the brick was blasted with baking soda to remove the excess concrete but not pit the brick. Last, all mortar joints were repointed as mortar from 1889 turned to putty over time. When we removed the concrete, we discovered several gothic window and the original doorway to the bell tower, all of which had been filled with rubble and whitewashed.

Another dramatic change to the room was the removal of the drop or hip ceiling. The original wide board, painted a green-grey was afixed to the bottom of the beams which are 22-feet above the floor. Sometime in recent history, white office tiles were attached to this planking. Removal of the ceiling began with the removal of the office tiles, then the planking, and finally the bracing between the beams. Surprisingly, the large gothic window and small stained glass windows above the entry were completely concealed by both the attic and the concrete slurry on the wall. We revealed these windows for the first time since construction and now light streams through the stained glass for the first time.

We solved the dilemma of what to do with a window no longer serves as a window after the building was added to over the years. We designed screens with a repeating Venitian Cross (quatrefoil) that we adopted from the chandeliers that hung in the sanctuary and are now in Little Bird Lounge, and hung these screens over the now color-selectable opening.

After removing the cement slurry, we also discovered that the two doorways into the hall had been shifted to the center of the room. The arched brick header revealed the original location and we returned the entry to those two locations. For the methodist church we're told, one entry was for the men and one for women, though they rejoined upon entering the sanctuary. Of course, we used all original bricks in the process.

Of course in addition to the reconstruction, we had to add our signature design elements. The six flying saucer like chandeliers are Poulson factory lights that we ordered from France in a Clementine gold. And the audio, video and other lighting is too much to discuss in this article but is state of the art.

Today, Ad Hall is an approximately 2,800 sf room that tends to take people's breath away when they see it for the first time.